Dang! I was gonna go fishing with Jim and Charlie...

"Here's the plan," said Jim Roode:  We wait until ice out at Delaney Buttes, and fish from the bank into the open water.  Big fish."

All of us had Jim's invitation to go to the lake north of Walden, but only Charlie Higgs took him up on the offer.  "You missed a good one," Jim said, upon his return. "That cut bow (see below) was 23" and I also returned a bigger brown that took over 5 minutes to land on 2lb test line. The fish was exhausted and needed to be returned immediately. He was a couple of inches longer measured next to the rod and twice as heavy as that cutbow. I caught 5 more from 10 to 18" in two half days of fishing and Charlie caught more than twice that many. It was a good trip." 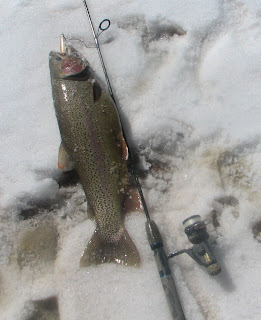 Posted by Bill Prater at 6:33 PM No comments:

DENVER - Whether you’re a seasoned angler or you’ve never picked up a rod, finding a place to fish in Colorado has never been easier! Colorado Parks and Wildlife has launched several new tools for anglers ready to enjoy everything Colorado fishing has to offer.

In addition to the new interactive Colorado Fishing Atlas, Colorado anglers can now share tips, share recipes, get the latest conditions, find a fishing buddy, find a fishing clinic, ask questions, or post pictures of their latest catch on the Colorado Parks and Wildlife Fishing page on Facebook. Facebook users can find and "like" the new page by searching for "CPW Fishing" or by going to http://facebook.com/CPWFishing.

Posted by Bill Prater at 6:23 PM No comments:

Okay, some of you fish more in a week than I do in a month. And the fish I pulled out of the ice this winter all came from my freezer.  But I’ll bet I AM generally cleverer than most of the club when it comes to scouting and fishing new water.  And I’ll show you how and why:  by taking advantage of new internet technology – especially Google Earth, Bing Maps, another web tool called Angling Technologies that costs a little, and some related new Colorado Division of Parks and Wildlife software.

Read more »
Posted by Bill Prater at 1:40 PM No comments: