Using a fly and bubble, Dave hauled in trout all morning long at Flatiron Reservoir, including the four biggest totaling 43 1/4 inches to earn him the revolving annual trophy as the club's top angler.

In the process, he knocked off the 2012 winner Norm Engelbrecht, who cooked the traditional tournament picnic for about two dozen anglers.

One of Dave's four was also the largest fish caught on Thursday, at 13 1/4 inches.  He earned $50 for the biggest string, and $20 for largest single fish.  Mike Scheber was declared winner of the prize for the smallest fish hauled in for the day, a spunky 7 incher, earning him  a $20 cash prize.

Jerry Reid's four-fish strnger was second in that category, 38 3/4 inches, and Arnie Stroschein's was third at 30 1/2 inches.
Posted by Bill Prater at 9:52 PM No comments:

Senior Derby : a Grand Old Day on the water


The 2014 Loveland Fishing Club Senior Derby, our third, was a rousing success - splendid weather and great companionship with residents of seven assisted living centers and other elderly guests recruited with the aid of Chilson Senior Center.  Mike Scheber, who cleaned trout for takehome meals, reports more than 50 trout headed home for the frying pan. More photos to come.  Great job, everyone.

NEWCOMERS NOTE:  Be there!  This is one of our biggest social events of the year, the only official competition between club members.

Okay, last year's annual club tournament was a washout, a victim of the September floods.  So Norm Engelbrecht has kept the revolving Grand Champion Trophy for two years, after catching the biggest stringer of four trout at the 2012 competition at Flatiron Reservoir.  You can rip it right out of his hands, by catching the four biggest trout at the annual competition, that runs from noon to 8 a.m. Thursday.  Norm will do the cooking this year, at the free picnic that follows the competition.

Mark this on your calendar! Wed, Sept. 17 is the Senior Derby!

On Wednesday, Sept. 17, one year and a day after cancelling its third annual Loveland Fishing Club Senior Fishing Derby for elderly anglers, the club will host residents of seven of the city’s assisted living centers along with other seniors signed up through the Chilson Senior Center.

The event will be from 9 a.m. to 1 p.m. at Flatiron Reservoir, the Larimer County Parks and Open Lands reservoir west of Loveland on County Road 18E. About 100 guests are expected for the day of fishing, followed by a cookout.  The derby is co-sponsored by the Chilson Senior Center, and Colorado Parks & Recreation is helping ensure a great event with the stocking of catchable-size rainbow trout from the Watson state hatchery at LaPorte.

The Loveland Fishing Club wants to express a very special Thank You to Colorado Parks & Wildlife, Larimer County Department of Natural Resources and the City of Loveland for all the help they have given us to make this event possible.

As in year's past, this is one of the club's premier volunteer activities, and all members are encouraged to show up and help.  Click on "Read More" below for a list of club members with specific assigned team lead responsibilities:
Read more »
Posted by Bill Prater at 5:21 PM No comments:


To view the pdf file of the obituary that will be published by Dale's family, click on the link below.

Read more »
Posted by Bill Prater at 5:40 AM No comments:

A reception is planned for Saturday, Sept. 20, for the late Dale Owens, who passed away in a tragic boating accident while fishing at Blue Mesa.

Dale’s body was cremated in accordance with his wishes, and no formal services are planned.  His wife Mallorie says the “family will greet and share memories with friends” from 2 to 4 p.m. at the family home, 2749 Abarr Drive.  No memorial has been chosen for donations, but people are “free to donate to the charity of their choice” in his name.

“We are still trying to process what has happened and take care of the myriad details I now face,” Mallorie told club Vice President Lou Colton.  “I will need a lot of time to process this.  He was a wonderful person and the very best husband and partner I could have had.”

Dale was fishing with a friend at Blue Mesa on Sept. 3 when a sudden squall hit and swamped his boat.

As Mallorie noted, he was a wonderful person.  And he’ll be missed.

Posted by Bill Prater at 8:09 AM No comments:

The lure of fancy dining and gullible fish led about 30 club members to Swift Ponds Tuesday for a great day on the water.  Most everyone caught at least something, and Lou got in some great practice.  Thanks again to Brad Wright and Colorado Youth Outdoors for making the day possible. 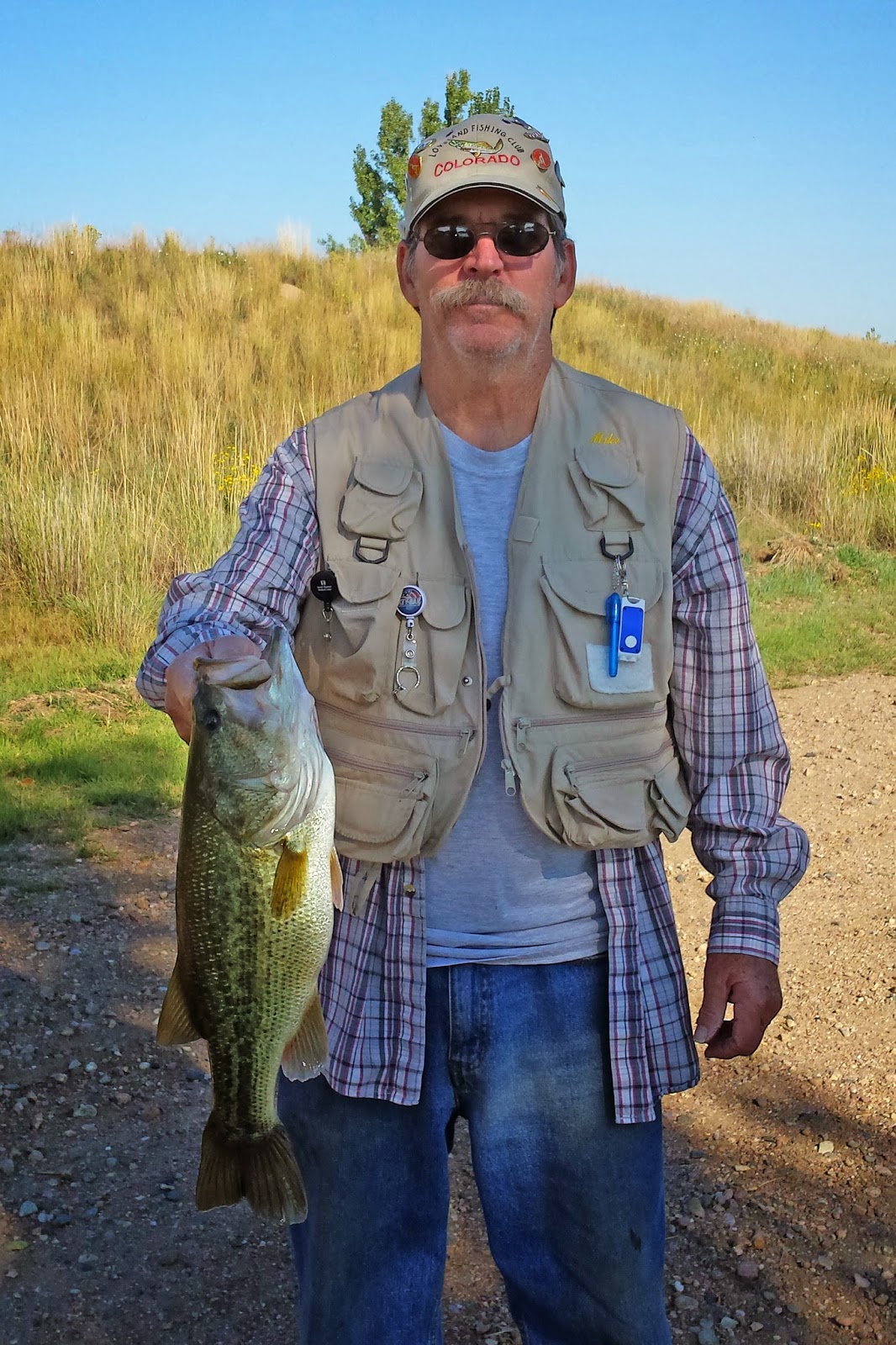 Posted by Bill Prater at 3:52 PM No comments: