The idea sprang to mind more than a decade ago, when then-President Ray Park pondered ways to leave his mark on the Loveland Fishing Club’s legacy. We settled on the idea of a day of fishing for folks even older than ourselves, and began to scour the country for ideas we could steal, mostly by Internet search. We found a ton of “senior derbies,” but all seemed to involve some sort of blanket invitation for old folks to come out and fish.

Hey, we already had a club for that.

And so, over coffee, the idea evolved:  Why not a senior fishing derby for folks who find themselves physically unable to still get out and fish? We began talking with administrators of Loveland independent and assisted living centers, and on in fall 2006, held the first-ever Loveland Fishing Club Senior Fishing Derby, at Flatiron Reservoir southwest of Loveland. It may sound odd to have a bunch of mostly octogenarians hold an outdoor event for other octogenarians. But really, it’s simply a case of doing for others what we’d like someone to eventually do for us:  do whatever is needed to put a fishing pole back in their hands.

That first derby was funded largely through a Community Service Grant from the IBM Corporation, through a program that promotes volunteerism among its employees and retirees. Fourteen years later, the event is a Larimer County institution, still managed by Ray, Warren Wolf and a gang of gray-haired volunteers, though some are admittedly moving a little slower than when all this started.
This year’s derby is set for 9 a.m. to 1 p.m. Wednesday, Sept. 25th at Flatiron Reservoir, a Larimer County Open Space property where there is normally an $8 daily entrance fee. The club also works with Colorado Parks and Wildlife to purchase a sort of in bulk fishing license for participants, and the Division also stocks the lake in advance with trout.

The event cheerfully remains entirely free for participants, including loaner fishing equipment, a well-stocked lake, prizes, and a “gourmet” cookout of hot dogs, chips and soft drinks. The IBM Corporation had also helped the club fund major handicap access improvements to Flatiron in 2012, aided by a Fishing is Fun grant in a cooperative effort with the Larimer County Department of Natural Resources.
The derby remains, we think, the nation’s only free fishing derby focused on residents of assisted living centers, run by and for senior volunteers. Other seniors are welcome, as we partner with Chilson Senior Center, but the primary invited guests are residents of Loveland assisted living centers.

With the City of Loveland providing liability insurance for the derby, Colorado Parks and Wildlife supplying trout, and the eager cooperation of a dozen senior living centers, the derby attracts close to a hundred participants each year. We could unquestionably grow larger. But truth be told, we’re too damned old to take on many more guests. The goal is highly personalized help with fishing, mixed with great conversation. And if you want, Tom Miller will clean and bag your fish to be cooked back at home.

The first couple of years, many guests weren’t sure what to make of the derby, and contented themselves with watching their friends from the bank. Now nearly every guest is there to fish, and some come back year after year. 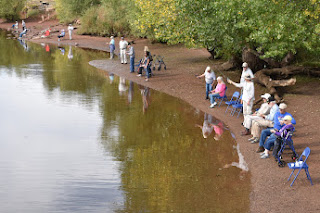 Senior living centers in nearby communities have been asking to participate, but because of the need to keep the event manageable we’ve tried to keep to the original target community.

The fishing club was founded in 2002 by about men and women mostly in our late 60s and early 70s. It’s now 2019; you do the math. We count on a stream of younger retirees and senior living facility staff to help keep the event thriving, but truthfully, a fair number of club members may turn up this year as guests rather than volunteers.

We welcome the idea. Behind this annual outpouring of affection for anglers no longer able to fish on their own is a touch of self-interest:  we don’t talk about it much, but truth is, we’re hoping someone, someday, will come by where ever we’re living by then and say, “Hey, Ray, let’s go fishing.”