It's Cold. Windy. May snow. Time for Delaney Butte!


Okay gang, things still look great for North Delaney on Tuesday and Wednesday, April 28-29.  Jim, Charlie and Bill will head out about 8:30 a.m. Tuesday, returning sometime Wednesday.  May be some others planning a day trip.  Contact Jim Roode asap if interested.

The lake is about 12 miles west of Walden, up highway 14 from Fort Collins.  In Walden, take Main Street to County Road 12 west for about 11 miles, then turn left on County Road 5, and after about 1.5 miles turn right onto County Road 5B.  Look for fish.

Or if you'd rather just watch the action from home, check out this You Tube video.

Posted by Bill Prater at 7:53 PM No comments:

Club's rods and reels get a real workout


For three kinda hectic hours Wednesday, club members showed introduced hundreds of youngsters - most of them ages 4 to 6 - to to use of a spin casting rod and reel.  It was a total kick.

For as long as we'd let them hold onto the pole, fledgling anglers tossed plastic minnow imitations into the fishless but tempting Chilson Lagoon.  Many were putting their hands on a fishing pole for the first time, and their chubby little thumbs were often too small to hold down the line release by themselves.  A surprising number caught on to casting quickly, others overcame early struggles and eventually did just fine, and ended by pushing parents to take them to the June 7 Loveland Police Kids Fishing Derby.  (We do need to invest in more casting plugs; a fair number wound up in trees and the lagoon.)

Read more »
Posted by Bill Prater at 8:37 AM No comments:

Still time to join us for Boat Day, Tuesday, April 22

Meet at South East Corner of K Mart parking lot on the corner of Wilson and Hwy 34.

Bring your Walkie Talkies.  Most of us will be heading for Boyd Lake.  Talk things over with your partner for the day.

Posted by Bill Prater at 8:15 AM No comments:

Here's a link to the article John Gwinnup referenced in his talk at the April 15 club meeting on the use of a bead and hook to catch trout in on the North Platte in Wyoming:
http://trib.com/lifestyles/recreation/wyoming-game-and-fish-may-update-several-fishing-regulations/article_3ae0938e-8b4d-50c6-a095-9fa49730d0f6.html

As John said, there's considerable uncertainty in Wyoming and other states about the legality of the technique, which is sometimes perceived as a form of snagging but apparently results in lower fish mortality.
It's not clear whether it's legal in Colorado, but this is really an intriguing new bait, getting a lot of attention.  We'll see if we can come up with a definitive answer.  Meanwhile, check out, this website, where they claim you'll "learn that matching TroutBeads to the egg drifting in the rivers is the most effective egg fishing technique ever developed."

Here's the lineup for Tuesday's meeting at Chilson Center:

Read more »
Posted by Bill Prater at 9:16 PM No comments: 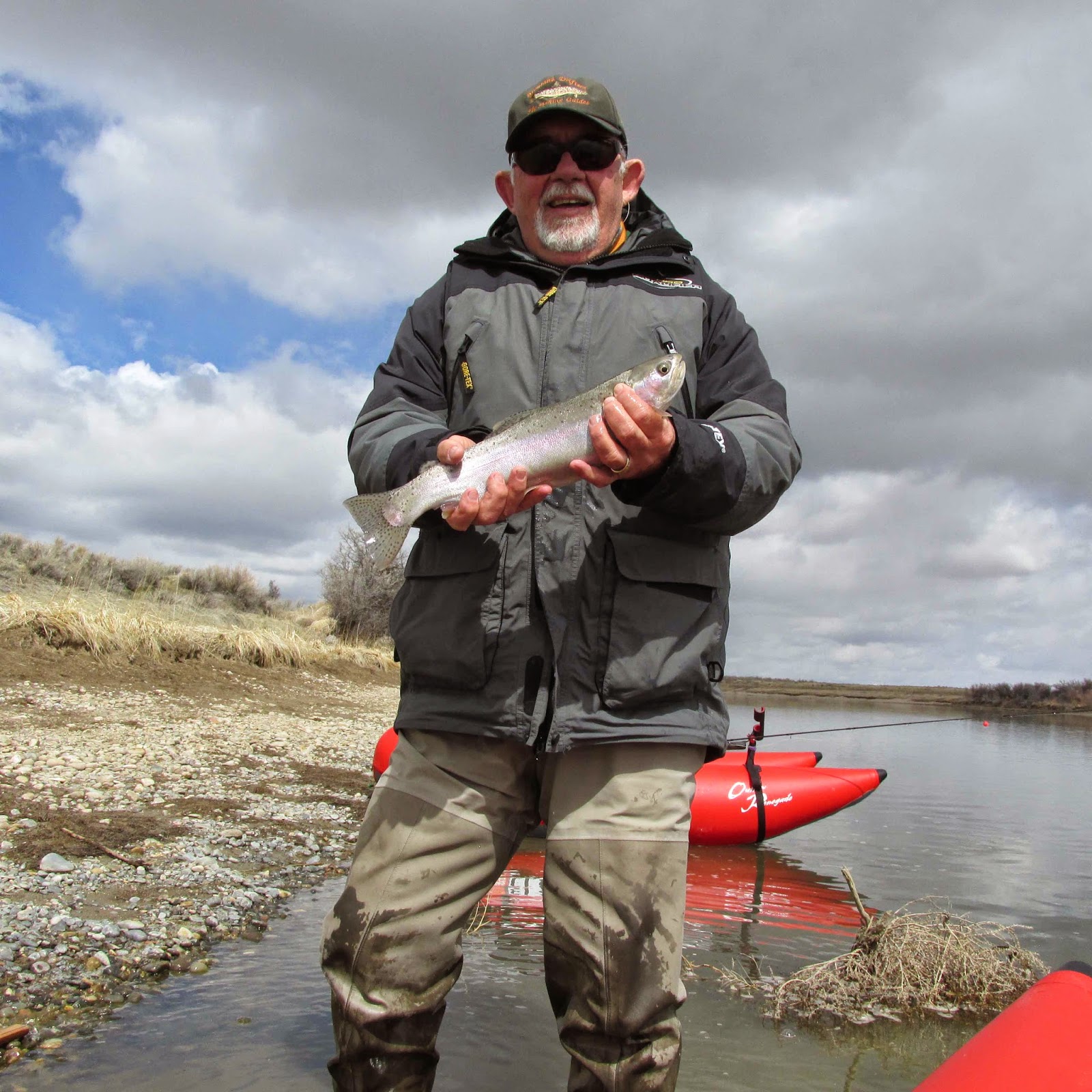 Okay, personal pontoon boats didn't prove to be the ideal way to float the Grey's Reef section of the North Platte River, but there were some fine fish boated during the outing, including Walt Graul's rainbow, right.  We'll hear more about the trip on Tuesday, and an effective, ethical way to catch stream trout during spawning season.

Posted by Bill Prater at 7:42 AM No comments:

Interested in helping with the Big Thompson cleanup?  The annual Spring Waterway Cleanup will be held on Saturday, April 19th from 9 a.m. until Noon.  This yearall focus is on the flood damaged Big Thompson River Corridor.  Signup is on your own:  for anyone 18 and under the only check-in location will be at Centennial Park.  For adult only volunteers the other check-in location is at Rossum Drive where the Big Thompson River crosses just north of Highway 34.

Reminder, all volunteers must sign up on the City of Loveland CERVIS website at…. http://www.cityofloveland.org/index.aspx?page=2068
Read more »
Posted by Bill Prater at 8:58 AM No comments:

A dozen or so of us turned out for Tuesday's boat fishing day on Tuesday at Boedecker Reservoir, and between us caught one lone fish. (Merle's white bass). Tom Miller turned up on the same lake two days later, without a pole, and spent the day more productively trying out his temperature gauge and new fish finder.  He files this report:

Read more »
Posted by Bill Prater at 4:00 PM No comments:

Boaters and float tubers will visit Boedecker Reservoir on Tuesday, April 8, following up on reports of a good crappie in the lake west of Loveland.  There's no specific start time; you might want to be there around 9 a.m., when it's warmed up a bit but hopefully not yet wind-blown.

Meanwhile, John Gwinnup is planning a trip Tuesday to Parvin Lake, the great little Parks & Wildlife-managed property near Red Feather for some early-season open water trout fishing.  If you'd like to join him, he'll be leaving from the King Sooper parking lot on 29th street at 8 a.m.

For the stout-hearted, the first catfishing trip of the season is planned for Thursday night, 8 p.m., at Lon Hagler.  Join us at the parking area at the south end of the lake.  Look for anglers who cleverly bundled up for the cold, brought a lawn chair and warm or warming liquids, armed with one- to two-ounce weights, a 1/0 hook or better, and catfish baits like uncooked shrimp, chicken liver or night crawlers.

All these ambitious plans are subject to rapid change; this is early April in Colorado.

Alert angler Pat Weller passes along this April 1 photo of Wisconsin anglers on their favorite lake, caught between the seasons and hoping for a thaw.