Um, change in plans for Boyd

One problem with being retired. Is, you kind of lose track of time, even holidays. Linda just asked me, “ Fishing Wednesday? We have to be at the neighbor’s party...” sorry gang, go as planned. If you can, but I’m having to wait till Thursday. Same time and place, 8:30 a.m. in northwest corner of Marina Inlet. Join me if you can.
Posted by Bill Prater at 9:56 PM No comments:

The ice is solid, and the Marina Inlet is a zoo today with anglers who must have gotten ice fishing gear for Christmas. Fish are biting. Let's meet at the northwest corner of the inlet about 8:30 a.m. Wednesday.

If you don't have an annual pass and want to save $9, drop me a note and we can drive in from my house. Click here. I just have a hand auger, which ought to work fine, but gas or electric welcome.


The Loveland Fishing Club Board has approved funding of CPR training for club members whose dues are paid for 2020. Non-members may also attend at a cost of $10.

Posted by Bill Prater at 9:41 PM No comments:

Slow, but some nice trout Wednesday on Lake John

For the second trip in a row, the wind stayed calm and the ice stayed solid on Lake John for Loveland Fishing Club stalwarts. Pat Weller notched this fat female. 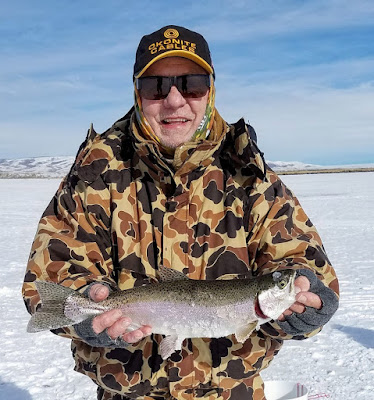 Posted by Bill Prater at 9:54 AM No comments:

I think this tactic only works with clear ice...

Looking for a warm place to fish?

Well, good luck with that around here. On the other hand, there are a few spots with open water around here and at least a few trout to merit your attention.

The dock on the marina inlet of Boyd Lake is still standing in open water, and the lake was heavily stocked a month or so ago in anticipation of a January ice fishing derby. You might also want to look at the Recycle Pond in Loveland, where aerators keep the water open longer than other local waters.

Also, Charles Piche reports having good luck with good-size trout on the south end of Carter Lake, which seldom freezes over. He's thinking the water on that end is a bit warmer than elsewhere.

Posted by Bill Prater at 3:55 PM No comments:

We'll have coffee and cookies, and a limited agenda. Plan on bringing a new, wrapped gift valued at around $10 for the gift exchange.

Our January meeting will be a week earlier than normal, 2 p.m. Tuesday, Jan. 14.

A seasonal reminder on what keeps us all friends


We don’t talk politics in the Loveland Fishing Club.

You won’t find this rule in our bylaws, but it is a guideline that has allowed our randomly chosen, wildly opinionated seniors to harmonize for nearly two decades.

With an average age approaching 80, it’s not that we lack strong opinions. It’s just that we collectively choose not to air them in situations where discussion should be on trout, bass, or scheduled hip replacements.

Tom, Dennis, Jim and I have known each other well enough, long enough, to realize we don’t agree a damned bit about most things political. But in nearly 20 years of really close acquaintance, I don’t recall a single cross word between us. Like a couple celebrating their 50th anniversary, we know exactly which buttons to push to annoy one another; we just choose not to push them. Similarly, I just returned from a harrowing one-day ice fishing expedition to Colorado’s North Park, involving a snowy, six-hour round trip through the mountains.  On that memorable expedition, Norm, Rick and I talked about every damned thing except anything remotely to do with topics that dominate the national news. The radio was never tuned to CNN or Fox; when it was on at all, the dial pointed straight to Willie Nelson.

Has your spouse taken away your access to the TV remote? After your most recent, disastrous Thanksgiving Day discussion with in-laws, did you vow to enter the priesthood, or take up mindfulness meditation? Well, you don’t have to devote the rest of your life to contemplating your navel; just shut up and fish. You cannot ponder elections or impeachments or likely public hangings while paying close enough attention to the tip of your ice fishing rod. Or looking online for sales on Z-man plastic grubs.

So. Don’t talk politics in the Loveland Fishing Club. Or your mahjong group, or almost any social gathering where members are drawn together by something other than mutually agreed to, shared political obsessions. If, over time, you somehow learn you share political beliefs with someone else, great. Go to the corner of the room, away from the rest of us. Or create a distribution list for like-minded fanatics. Just don’t use a shared love of fishing or recommended hemorrhoidal ointments as an opportunity to convert other anglers to your political passions. You won’t change their opinion on any topic except whom to invite on the next fishing trip.

Don’t do it. This is arguably the single most powerful suggestion for remaining friends in unfriendly times. It’s an impressive insight, if I say so myself. The late Mr. Rogers of Mr. Rogers Neighborhood, one of the gentler humans to ever grace this planet, could only narrow his list of rules to three:
1. “The first way is to be kind.
2. The second way is to be kind.
3. The third way is to be kind.”
Posted by Bill Prater at 8:02 PM No comments:

Come join us for an Ice Fishing Fest! Learn new techniques from local ice fishing experts, build your fishing network, and enter for a chance to win great prizes!

*Seminars will be in our Training Center located on the second floor near the fishing shop/second floor bathrooms (go in the west doors, turn right past the registers, go up the stairs and to the right).

EXCLUSIVE DISCOUNTS
We will be offering exclusive discounts on Ice Fishing gear during the event!

Posted by Rick Palmieri at 10:04 AM No comments:

Things got a bit dramatic Thursday on Lake John, when Rick Palmieri and Bill Prater's blissful pursuit of a few fat trout was interrupted for a good 10 minutes by Norm Englebrecht's battle with an obese 21-inch cutbow.

Everyone ended the day on a high note, with a few fat, healthy fish to talk about at breakfast or to eat at dinner.

This trip is only a month away so if you're wanting to go call Norm (970-685-0566) or see him at Friday breakfast.  There's room for ten people and we have five for sure and maybe eight already signed up to go. Club members get preference. We'll leave Friday, Jan 10 and return on Sunday, Jan 12. Once we know who's going for sure we can all meet and figure out the logistics and go from there.

If the ice is not good or if weather does not permit safe travel the trip will be canceled or rescheduled.

From Loveland (287 and I-25) it's about 250 mile away. (See map below) More than a few club members have been at this place before and caught some large Northern Pike. It's a fun trip. Photos are not club members but you get the idea.

You have to bring all of your own food, the closest place to eat is about 30-35 miles away. That's a long round trip. Everything you need to cook is available where we stay.

Cost is $50, which includes both nights lodging, whatever food you bring and sharing the cost of fuel with whoever you ride with. 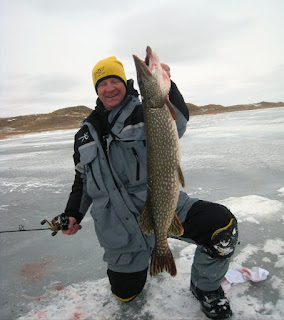 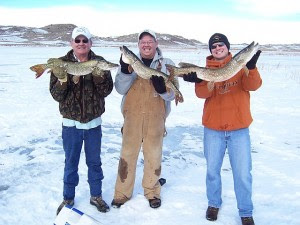 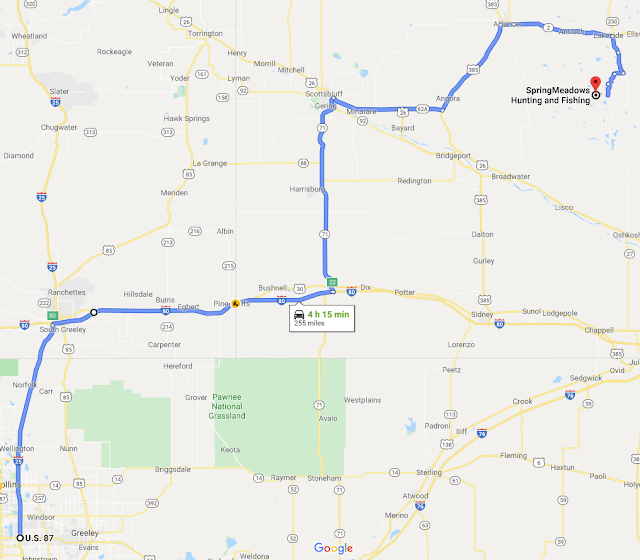 Posted by Rick Palmieri at 8:03 PM No comments: