Fishing in a steady, icy rainfall, Don Knudsen caught only a single fish during the Loveland Fishing Club's annual tournament Wednesday, but the 17 1/4-inch largemouth earned him bragging rights, $25 and his name on the club's rotating trophy as top angler.

John Gwinnup also earned $25with the largest non-bass of the day, an 8-inch crappie.

Temperatures hovered around 50 degrees throughout the morning, but we had a strong turnout and a great time at Swift Ponds, as guests of Colorado Youth Outdoors.


Don't worry about Leland kicking your butt again Wednesday; as winner of last year's club tournament, it's is turn to cook us a celebratory meal.  Just show up at the Swift Ponds pavilion before 8 a.m. Wednesday, Sept. 27 with a fishing pole.

To get there, turn right off I-25 at the highway 392 exit west of Windsor; then take a left at the light on County Road 5.  Go north about 3 miles then left on Kechter Road and look for the Colorado Youth Outdoors entrance.  The pavilion will be on your left.

Remember, no live bait, and catch and release only.  We'll be measuring each other's catch, and there will be two prizes - one for biggest bass, one for biggest fish that's not a bass.

Posted by Bill Prater at 7:23 AM No comments:


Flatiron Reservoir is still low and pretty fishless because of construction, and the club will hold its annual tournament at Swift Ponds, north of Windsor, on Wednesday, Sept. 27.

Details will be announced at the general meeting Tuesday, Sept. 20.  But here are a few highlights:
Leland Carpenter, last year's champ, will be this year's cook for the post-tournament meal.  Pat Mikulak finished second last year and Richard Radies took the prize for smallest fish.

Pat Mikulak finished second with a 44.5 inch string of four.  Leland also caught the biggest fish of the day, while Richard Radies took the prize for smallest.

Posted by Bill Prater at 6:02 AM No comments: Links to this post

Posted by Bill Prater at 9:06 PM No comments:

"From just about any perspective, this was another great event for us," says Ray Park, event chair and a principal organizer since the event was launched in 2011.  It was a bit warm for mid September, but not uncomfortable for our guests, though John Grady didn't draw the usual crowd to his river's edge campfire.


We're not sure who was our youngest guest - but Herdis Berquist of Brookdale North won the medal and prize for oldest lady angler at 107 years.  And Gerald Ravenscroft of Brookdale Mariana Butte was declared oldest male angler at 95.  Lloyd Mobley won for biggest fish, a 15-inch largemouth. Smallest fish of the day was hauled in by Matthew Korbe, and it was one of 13 fish he caught in Bass Pond.

Thanks Ray and Warren Wolf for ramrodding this great event, and to all club members who served as fishing guides, handled registrations, escorted guests, cooked and served and in general made this another example of the great things we do as a club.

Posted by Bill Prater at 3:20 PM No comments:


One of the club's responsibilities is to help with the annual Harvest Bazaar, planned for 9 a.m. to 1:30 p.m. Saturday, Sept. 23.

Volunteers are needed for a variety of positions; please sign up at the Chilson Center or at the club breakfast Friday.  See Karol Stroschein for more information.

What a way to help the kids 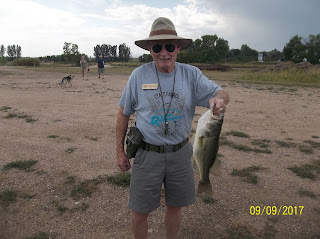 Emmet Jones, Dave Boyle and Dan Barker helped mentor youngsters fishing at Swift Ponds this weekend, and Emmet decided to try the fishing himself afterwards, and landed the fat largemouth at left.  CYO holds events like this for youngsters throughout the year.  For more information contact Dave or visit their website, http://www.coloradoyo.org/ 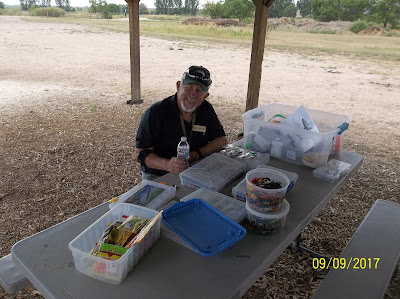 Posted by Bill Prater at 5:12 PM No comments:

Your help is needed to make this annual event a success.  Just show up before 9 a.m. Wednesday and we'll find you something fun and rewarding to do.


For the first time, The Loveland Fishing Club’s annual Senior Derby will be held at Loveland’s River’s Edge Natural Area.  More than 160 residents of the city’s assisted living centers and other seniors signed up through Chilson Senior Center are expected to attend, an all-time high for an event held annually since 2011.

The derby will be from 9 a.m. to 1 p.m. on Wednesday, Sept. 13 on ponds at River’s Edge, at  960 West 1st St, with fishing followed by a cookout.  Club members will serve as guides for participating anglers, provide a campfire and offer prizes for participants. Other seniors are welcome to attend the free event, but only pre-registered guests will be eligible to compete.  The fishing derby has previously been held at Flatiron Reservoir.

“Flatiron is not available to us this year due to dam repairs,” says the event founder and organizer, Ray Park.  “The City of Loveland has really stepped up to allow this special day to continue.

Because of the shift to River’s Edge, the club is incurring additional expense this year for things like port-a-potties and carts to help guests get around the natural area, but all expenses will continue to be absorbed by the club, due in part to grants from the IBM Corporation.

As in year's past, this is one of the club's premier volunteer activities, and all members are encouraged to show up and help.

The club is covering all expenses associated with the event, including poles, bait and tackle.  There will be a prize drawing for all guests, and prizes for the biggest and smallest fish brought in, oldest female and oldest male anglers, and “craziest fishing hat.”

Posted by Bill Prater at 4:41 PM No comments: