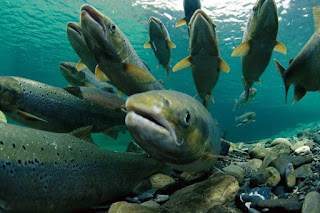 In the Pacific Northwest, several species of salmon are in danger of extinction. The Washington State Recreation and Conservation Office has released a report on the state of salmon populations in the state’s watersheds—and the findings predict a grim future.

The report was commissioned by the Governor’s Salmon Recovery Office, established by the state legislature in 1998 in response to the Salmon Recovery Planning Act. Its findings showed that 10 to 14 species of salmon in the northwest are “threatened or endangered,” and five species are “in crisis.”

The findings, though alarming, are in line with population trends over the last few decades. The once prolific salmon populations in Washington State have been declining for years, and populations are now estimated to be at about 5% of historic highs.

The five species of salmon and steelhead that the report found to be most at risk are Snake River spring/summer chinook, Puget Sound chinook, Lake Ozette sockeye, Upper Columbia River spring chinook, and Puget Sound steelhead—a sampling that covers a wide geographic area in the state.

Read the full story at PHYS.org